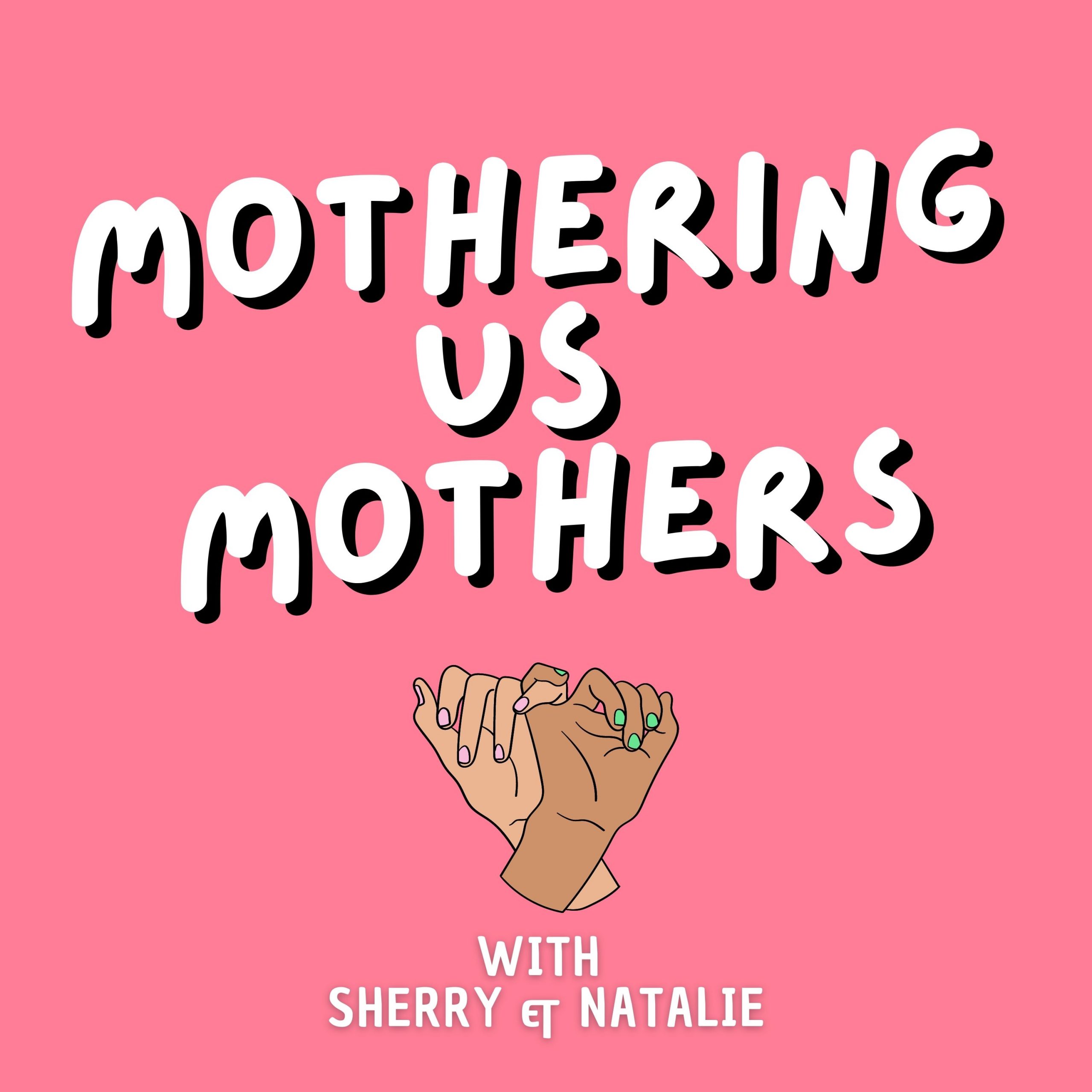 Mothering Us Mothers –
The Podcast with Sherry and Natalie

A shortened transcript of Episode 1, Season 1:

*I’ve edited the transcript to make it as accessible as possible be for everyone.

TOPIC: Mothering The Mothers and Honoring their Feelings

S: Today’s episode is about the concept of Mothering The Mother, what it means, why we think it is important and how we want to help you living it.

N: Mothering the Mother is about making sure that mothers are looked after and taking care of while they are trying to take care of this new life that they now have responsibility for – and it’s all sorts things. From making sure that she’s got a drink or that she’s eaten. When you have a baby, in those early days when you’re breastfeeding, you’re tired and all over the place and you feel ill and dizzy and you don’t know why. And then someone says „Oh, what did you have for lunch?”
And you’re like: „I had nothing, I didn’t.”
If she’s in pain, that it’s under control, that she’s able to sleep. If there are any chores around the house that you can do, you do them. Whatever that mother needs, you make sure those needs are met.

S: If I want to use that concept to support other women, maybe women in my family or even outside my family – when do I start with mothering the mother? Is it only used after birth or maybe even before that?

N: If you want to go all the way back, it is before. Because even in terms of conception… there’s lots of things you can do in regards to that: taking care of your nutrition and your mental well-being before you even fall pregnant. So that can easily come under the umbrella of Mothering the Mother. Then during pregnancy, the mom is going to be tired, her body’s going to be changing. She is going to have aches and pains – all sorts of things she may never have experienced. So, it really starts before a woman is even pregnant and goes all the way through your pregnancy and beyond. We tend to think of the early days after you have a baby but actually you are always postpartum – once you’ve had a baby. It can continue on for as long as a woman needs.

S: I feel like pregnant women are treated very well, but once you give birth people just forget all about you. They only care about the baby – what about you? You’re bleeding, you’re tired, you basically did the whole job on your own. People don’t want to give you credit for that.
They say: „Well you’re not the first one to give birth” – and that’s true. But you know what I say when I hear that? „Yeah, BUT I am the first to give birth to THIS baby.”

N: Yeah, no experience is ever the same. We could’ve both given birth vaginally, but the experience for both of us would be very different if we explained it, because we all experience things differently.  It’s so, so important to remember, that when a baby is born, so is a mom.
She’s just gone through this massive thing, because, let’s be honest they call it labor for a reason. It’s hard work, it’s tiring, exhausting. Physically, mentally, emotionally. And it can feel very much like „right, well you’ve done it now, here’s the baby, you’re discarded, thanks for that. Now, jump up and get back to work” It can be quite a lonely time because you don’t really wanna say „but what about me?”

S: It’s so sad, because you’ve done the whole job alone. But yet we hesitate to ask for help.

S: I think there definitely are mothers who – no matter how they birth experience was – just carry on and get over it. But for me, my birth experiences, be it negative or positive, affect me deeply. Especially after my second c-section. I wish there would’ve been someone to mother me. I did have help from my family who made me food and let me sleep but I felt like I still needed emotional support from someone who truly understood my pain and how overwhelmed I was. I think this emotional support is often times, simply ignored.

N:  Absolutely. We have this narrative that you have to be strong and just keep going – but actually, there’s nothing wrong with saying „I’m really struggling today”. Sometimes you don’t even want anyone to fix anything, you just want someone to hear you. You just want someone to say „Well, how are you? Baby is great – but how are you? How are you feeling? How was your birth? How is breastfeeding going?” Because, just getting it off your chest, is all you need sometimes. Being able to voice how you feel can make all the difference.

S: What about mothers that don’t want to be mothered?

N: I’m that type. I find it very hard to ask for help because I always thought that it makes me seem weak if I ask for help, or if I admit, that I am struggling.  We’re expected to just get on with it. There’s almost like a shame that comes with saying „I’m struggling, I’m overtired, I’m overwhelmed”. I wouldn’t have responded well to phone calls or coming around and stuff like that. But just small gestures, like a text, „are you okay? How are you feeling?” Just opening that door and allowing me to be able to respond – when I wanted to, that was really helpful for me.

S: I’ve had a c-section the first time and I had my husband helping me after birth, but I still got up on the second day after the c-section and tried to do as much as possible on my own just to show that I am strong and I don’t need help or any rest.

N: Well, where do we get that from? A cesarean is a surgery, it’s massive.  I don’t think there’s any other surgery someone would go through and be expected the next day to jump up and start cleaning and cooking. So why do we have that idea that this is strength? To almost hurt yourself?

S: And who am I proving anyway? I think others don’t even care.

N: I think it’s a really good question to ask because a lot of the times no one else is putting pressure on us – we put the pressure on ourselves.

S: So yesterday was International Women’s Day and I thought we could take a moment to honor our mothers, because I think it goes beautifully with our Mothering Us Mothers approach. You’ve made a post on IG about your mother yesterday, honoring that you wouldn’t be who you are today without her and also that she didn’t have it easy. Do you think she could’ve used a woman in her life to do that job? To mother her and be the one to embrace her and just show her that it’s okay and her feelings are valid?

N: Absolutely. My mum had her first child when she was 19 and she didn’t have any support, she found it very, very difficult. And then she had another baby quite quickly after, so by the time she was 21 she had two children. From what I know, she was almost looked down on. Everything she did was scrutinized by her mother-in-law.
She found it very difficult to deal with.
I don’t know the ins and outs, but years and years and years past and my mum actually had me when she was 41. So she was well older than you would think. A much older, wiser woman – but she said, she felt very much the same. Very alone and not supported.
She also had a cesarean. I was born in 1985 – so it wasn’t the nice neat scar they’re trying to give you now.  It was literally a vertical cut all the way open. And then her scar burst and ruptured. It was just awful. She went for a really hard time. She would’ve really benefited from someone just being there to look after her.

S: Having someone to sit beside her and tell her she was doing just fine and to acknowledge what she’s been through, that would have been so helpful.  I don’t know why, but most women seem to have imposter syndrome. We keep telling ourselves, I’m the worst mother – but it’s not true.

N: I would love to think that I would be welcoming and helpful to my future children-in-law. Especially, I’ve had children myself, so I get it. I know how hard it can be.

N: It’s just not nice – even on a human level. Why would you want someone to struggle like you did?  We’ll have to dive into the mother-in-law discussion.

N: How about your mom?

S: My mother is German, my father is Egyptian – they met in America. When she was pregnant with me, she was living with her mother-in-law, in Egypt and my dad wasn’t there, he was back in American working. She did speak a little bit of Arabic. I think it was okay, but even If she had help after birth with cooking and cleaning and attending to the kids, I still think it must have been hard emotionally.  When I put myself in her position, being a very emotional person, not being able to express your feelings in your own language to a person you feel safe with…  I imagine it to be very hard.
People speak of her like a saint – but maybe she never showed her true pain. Maybe she was that kind of person that just got on with her life and did what she had to do.
What else could she do? Nothing.

N: Sometimes, some women are in situations where they really don’t have a choice. Your mom was in a different country with her children and she would have just had to push on. As you said, she couldn’t just message your dad and say „I’m having a hard day”. It wasn’t like that. There was no WhatsApp or anything like that.

S: Just sitting down at the end of the day… Sometimes my husband tells me I’m complaining so much about the children, but, I have to! If I don’t, I will explode. I just have to get it off my chest to be able to wake up the next day and start anew.

N: I agree. It’s just the balance.  About being grateful but also being honest. I love my kids to death, but sometimes they get on my bloody nerves. That’s okay! They’re all people with their own traits and personalities … You have to be able to say it to someone.

How about grandmothers? Do you have any memories of the older women in your family?

S: My Egyptian grandma died when I was 2 or 3 so I don’t have any real memories, just photos and videos. My German was very helpful for my dad when we were little.

Grandmothers! A great topic to discuss here on our podcast one day.  But we’ve already reached the end of today’s episode, we’ve kept it short and sweet for you today . If you liked our first episode,  if you have any comments or questions feel free to reach out to us via email or Instagram. You find our contact information in the podcast intro. And I’d say that’s it for today.

Thank you so much, Natalie for this wonderful chat and I look forward to our next episode, next month! This is the Mothering Us Mothers Podcast with Sherry and Natalie  – thank you for listening!

Get all the news to my books, articles and free material.